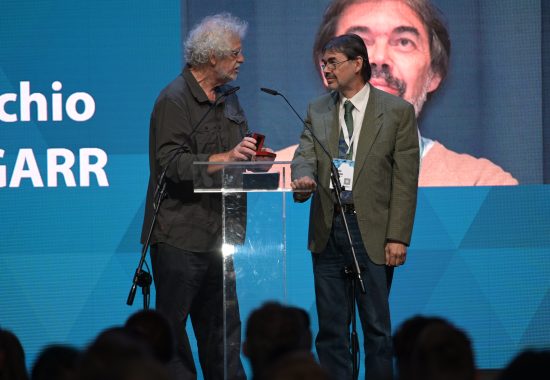 The 2019 Medal of Honour was awarded to Claudio Allocchio, senior technical officer for advanced applications and security at GARR, for the demonstrated achievements and long-lasting benefit he contributed to the research and education networking community throughout his career. John Dyer, member of the Board of Trustees of the Vietsch Foundation handed out the medal to Claudio Allocchio during a ceremony on 17 June 2019 at the TNC opening plenary.

The Vietsch Foundation Medal is awarded annually to individuals or teams that have developed new ideas as well as to those who have proved their organisational skills and whose efforts have led to the creation of institutions or services of long-term value.

In accepting the award, Claudio Allocchio said, “this is the most honorable award I could have received for my work, because it is in the name of Karel Vietsch, which I had the privilege to work together for so many years”.

Claudio Allocchio was born in 1959 in Crema, Italy where he attended high school. He had a clear interest in science, and technology, which in those years led him to coordinate a team of students who successfully built and launched a series of rockets. He then moved to Trieste, where he studied astrophysics and particle physics. In 1984 he won a study grant at CERN to apply astronomy image processing techniques to particle physics detectors track reconstruction, and then was confirmed as research fellow. At that time, he approached computer networking issues, creating the world first multiprotocol mail gateway service for universal messaging: “by pure coincidence” the user interface to access the global service was named GMAIL. He also started there to collaborate in creating network services in the High-Energy Physics community, and setup the first international link between CERN and Italy. In 1988 he moved back to Trieste, as network manager in the newly created Elettra Synchrotron Radiation facility, and joined the Gruppo Armonizzazione per le Reti della Ricerca (GARR) who later became the Italian NREN, and engaged in RARE WG1 mail and messaging, coordinating and later chairing the COSINE S2.2 proposal for a global messaging service. In 1991, Claudio was one of the RARE WG1 members who joined the IETF to standardize mail messaging systems, and since then was involved in the IETF Application Area, writing, editing and revising a significant number of RFCs. He also chaired some working groups, including the ietf-fax one, and took active part in all activities which involved messaging and real time communications. He was later called into the Application Area Directorate, and chaired it before the creation of the joint Applications and Real Time (ART) new area.  Starting in 1993 he was also involved in the creation of the “it” ccTLD domain Registry, and served as President of the Italian Naming Authority from 1995 to 2005 and advisor to Ministry of Communication domain names committee; he is  now a member of the ccTLD Registry Advisory Board. Claudio has worked in various roles in all GÉANT projects (including as Security Coordinator and as member of activities in the areas of multimedia, security, policy); he is currently also one of the main advisors for the EaPConnect project. He also was TERENA vice-president for technical programme from 2001 until 2007 and member of the board. In 2005 he started to work in the collaboration with Conservatorio Tartini in Trieste, where he is currently chief network engineer for LoLa development. Besides his education in Physics, he also has a formal education in music (piano).